Beautiful, kid safe and eco friendly
Plyhome had its origins in a sketch of a set of bunks for two children. Today, it’s blossomed into a successful, distinctive, and innovative New Zealand company with the long-term goal of expansion into Asia.

Anna Gilhooly took her initial drawing to engineer Rips (Euripides) Cassels. What Anna very modestly describes as a “mum - genius designer – collaboration” has resulted in a practical, impeccably detailed and beautiful children’s furniture range with clean lines and an adult aesthetic that littlies love too.

The choice of plywood was the result of intensive research. Anna says they were looking for a strong product – which would accommodate parents lying on a bed to read to children - but which was light enough to allow it to be moved for easy vacuuming under it.

The idea was prompted, in part, by one of Anna’s children who is asthmatic. (An issue that is prevalent in New Zealand). “So, a box-spring mattress is a definite no-go.” Anna says.
“We also liked the look, and the edging. Our goal was also furniture that wouldn’t date and designed for real kids, not show home kids.”

The company uses primarily Plymasters Euro Birch because it is enduring, sustainable and will take the knocks. There are also no “nasties” in the product.
Anna says it was difficult to find really great ply “without plugs” but Plymasters came through with a reliable, high quality product.

The range which currently extends from babies to teens has “only scratched the surface” of the potential market according to Anna and adult ranges are not too far away. 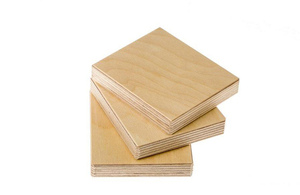