Jarden – Wealth Investors moved into a new office space, and wanted to update their open kitchen so they could host in-house events for clients and networking events for their community. This is where Alison Chisman came in, a Designer from Steadfast Joinery whom created this striking communal space for Jarden’s team members. They also love to brew their own craft beer, so having the triple beer tap, linked to a keg refrigerator was one of their main focuses.They opted for discreet and integrated appliances, so as to avoid the traditional ‘office kitchenette’ feel.

In their office, there is a lot of structural oak throughout the existing commercial building, hence the Herringbone Oak Veneer splashback was a great way to tie into the new fitout, and make it feel as though it was there from the beginning. Plymasters Herringbone Oak Veneer is laid in a pleasingly symmetrical pattern then pressed onto a MR-MDF. – A very cost effective alternative to achieving the same decorative effect out of solid timber. 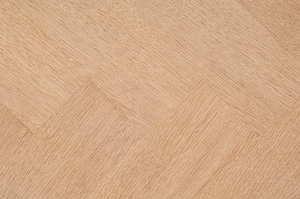